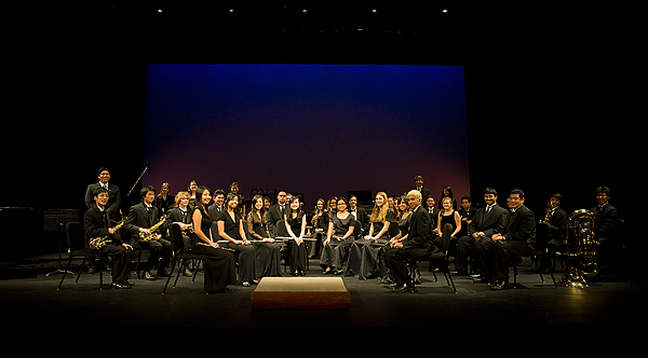 Courtesy of Trish Barker Photography
The KKHS Wind Ensemble is one of two primary performing group for the King Kekaulike Music Program. Comprised of 42 students ranging from grades 9 to 12, this course is designed to be a continuation of the intermediate school band experience and to prepare students for band performance at the collegiate level and beyond. The Wind Ensemble specializes in the performance of both classical and contemporary wind band literature ranging in difficulty from grades 3-7 (out of 7).

Wind Ensemble members must be registered in either Band I-IV or Ensemble I-IV to participate. After-school rehearsals are often mandatory (though we work around sports and clubs… see Mr. Nagata for details) and begin at the conclusion of marching season. These rehearsals usually run from 3:00-5:30 pm on Mondays and Thursdays.

Guest Artist Series
With its inaugural event in the spring of 2012, the King Kekaulike Wind Ensemble and Na Ali’i Big Band are proud to present our annual Guest Artist Series at the Maui Arts & Cultural Center. 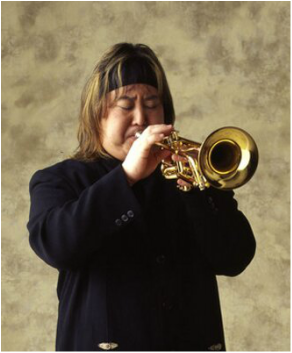 Beginning at age fourteen and through high school, Eric had the opportunity to play professionally with Sammy Davis, Jr., Engelbert Humperdinck, the Temptations, the Four Tops, Tom Jones and Henry Mancini. When Eric was eighteen years old, he won a position with the All-American High School All Stars and played with Maynard Ferguson and his big band at Carnegie Hall for the Jerry Lewis Telethon. 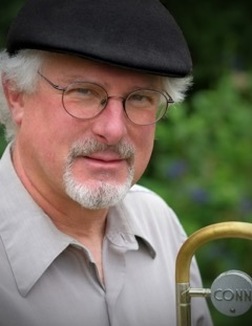 Dave Glenn (2015)
​Dave Glenn was Director of Jazz Studies and professor of low brass at Whitman College in Walla Walla, Washington from 1989 until his retirement in 2011. He received a Bachelor of Music in trombone performance from North Texas State University and a Master of Music in composition from the University of Northern Colorado.

Dave spent eleven years as a professional trombonist in New York City and while there, played for ten years with the Gerry Mulligan Concert Jazz Band and toured extensively with Bill Watrous’ Manhattan Wildlife Refuge, Diana Ross, and Lou Rawls. He also subbed on tours with Chuck Mangione, Blood, Sweat and Tears, and the Mel Lewis Orchestra and was on the Grammy-award winning recording Walk on the Water by the Gerry Mulligan Concert Jazz Band.

Dave has also recorded two jazz CDs of his original compositions and arrangements, Journeys and National Pastime (released in June 2009). He has composed five commissioned works for orchestra, the latest being “Romantic Fantasy on Themes by Mozart” for the Walla Walla Symphony in 2015, and numerous chamber works including “Fireflies,” the title piece of a CD by the Free Range Saxophone Quartet (Origin Classical Records) and “Sculpture Garden for Piano Quintet,” commissioned by the Walla Walla Chamber Music Festival.

Dave Glenn is an endorsing artist for Conn/Selmer, a member of the American Composers Forum, and an Origin Records recording artist. 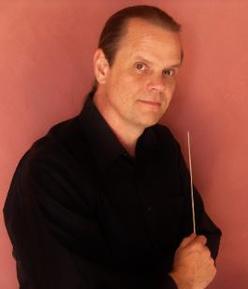 Dr. Robert Spittal (2014)
Dr. Robert Spittal is an American conductor, composer of music for band, orchestra, chamber ensembles, and electronic media, and a Professor of Music at Gonzaga University in Spokane, Washington. His music has been described as “original,” “inventive and witty,” “intelligent,” and “full of musicality” and is published by Shaba Road Music, Boosey & Hawkes Co., and Maestro and Fox Music. Robert 's works have won favor with the finest professional and academic musicians in North America, Europe and Asia.

Robert's works frequently combine sophisticated art music forms and techniques with a non-patronizing sensitivity toward audience accessibility. This duality – the musician's concern for aesthetic sophistication and artistic integrity, and for communicating more openly and directly to a listener – has been developing since his adolescent years as a flute student in the Cleveland Institute of Music's Prep Program, and as a freelance saxophonist in horn sections of jazz, R&B and dance bands on the city's west side.

An interest in wind music developed at Ohio State University, where he studied conducting with Craig Kirchhoff. He later studied with renowned wind conductors Michael Haithcock and Eugene Corporon, and received a Doctor of Musical Arts degree from the Cincinnati College-Conservatory of Music in 1995. 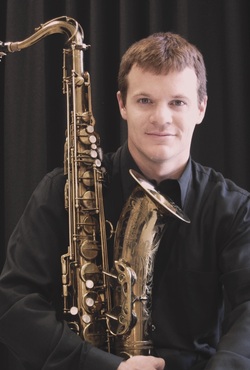 David Fague (2013)
David Fague began his professional playing career in the Spokane Jazz Orchestra in 1997 while still an undergraduate at Gonzaga University. After completing his B.A. in music education in 2000, Fague went on to the University of North Texas to pursue a master’s degree in jazz studies.

While at UNT, David played and recorded in several ensembles including the UNT Jazz Singers, the Jazz Repertory Band, Classical Saxophone Quartets, the UNT Two O’clock Lab Band, and the Grammy-nominated UNT One O’clock Lab Band.  During his time at UNT, he had the pleasure of performing with world-renowned jazz musicians including Chris Potter and Bob Brookmeyer.

After finishing his master’s degree in 2004, David rejoined the Gonzaga University Music Department as Director of Jazz Studies and Pep Band.

David currently performs regularly around Spokane as a saxophonist in the Spokane Jazz Orchestra, Hot Club of Spokane, and The Rhythm Dawgs, and as a bassist in the Nicole Lewis Band and the Sharp Five Jazztet. 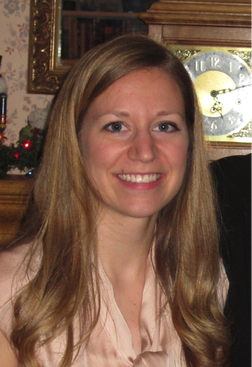 Kyla Fague (2013)
Kyla Fague graduated from Whitworth University in 2001 with a degree in music education and received her master’s degree in conducting from the American Band College at Southern Oregon University. While at Whitworth, she was awarded the Anna J. Carrel Outstanding Senior in Music Award and was a member of the Wind Symphony and Jazz Ensemble I, playing saxophone as well as studying piano.

Kyla taught high-school band for four years in her hometown of Fairbanks, Alaska, and at the 2005 Alaska Jazz Festival, she received the Most Distinguished Director Award.

After returning to Spokane, Kyla taught band at Medical Lake High School and Medical Lake Middle School. She is now in her seventh year as an adjunct instructor at Whitworth University, directing the Concert Band, teaching conducting, and currently directing the Wind Symphony for the 2013 spring semester. 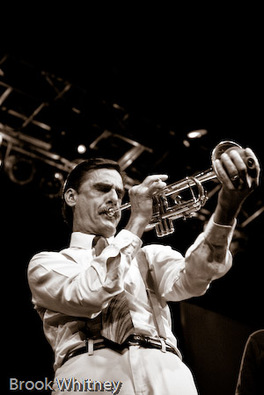 Michael Lenke (2012, 2014)
Michael Lenke is known throughout the Pacific Northwest as a powerful, high energy trumpet soloist who is as equally adept at playing gorgeous, lyrical trumpet and flugelhorn solos within a symphonic concert setting as he is soaring over the top of a jazz orchestra.

Having been raised in a military family, Michael grew up living near several major U.S. cities throughout his father`s Air Force career. In 1972, his family was stationed in the San Francisco Bay Area, where he had the opportunity to see the great jazz orchestras of Buddy Rich, Stan Kenton, Maynard Ferguson, and Woody Herman, as well as the many famous horn bands prevalent in the Bay Area at that time. Inspired by the music surrounding him, 12-year-old Michael fell in love with the trumpet and decided to pursue a career in music.

Michael's long career as a trumpeter has blessed him with the privilege of traveling the world and being associated with such names in the music and entertainment industries as the U.S. Army Band, U.S. Air Force Band, Buddy Rich, Maynard Ferguson, B.B. King, Ray Charles, Lionel Hampton, Bob Hope, and Sherman Andres, to name a few.

Michael currently resides in the Spokane, Washington area as a trumpet soloist, vocalist, studio musician, and clinician, and as a trumpet instructor for Gonzaga University and surrounding high schools, performing and recording with top national and local bands, shows, theaters, and casinos. 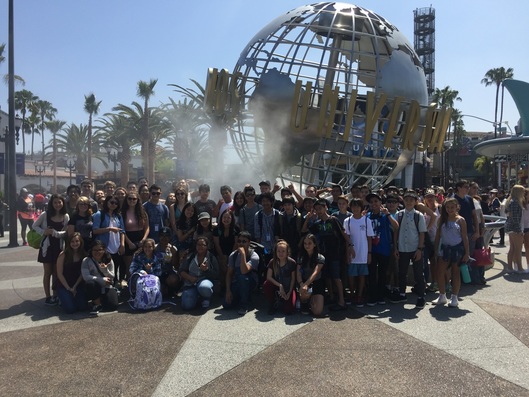 Travel also plays a large role in the Wind Ensemble experience. In the past, the band has performed in Anaheim, California; Green Bay, Wisconsin; and throughout the island of Oahu. 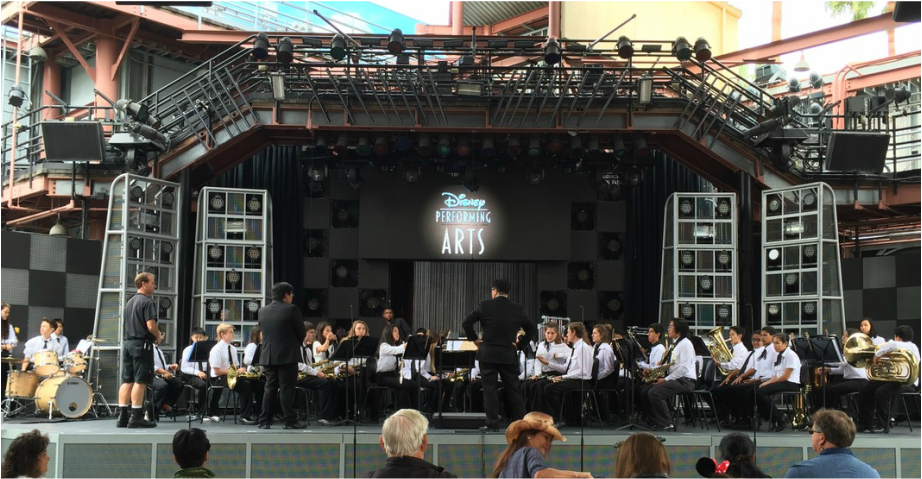